It’s wonderful that we’re all different, not only how we arrange our desks, but also how we sit at them. Rarely do two people sit in a chair the same way, as illustrators should portray. I enjoy music of almost every kind and may listen while writing emails, but unlike some authors, never when writing fiction. It’s very hard for schools to organise classrooms to provide ideal learning situations for all students. When I’m thinking hard, I either like to wander around or pace up and down, or sprawl or curl up in a chair, and never sit bolt upright.

Gurus advocate keeping a desk clear of clutter, but I can only keep my desk is tidy for a day…after I’ve swept all the papers and ‘stuff’ into a box, because the relatives are due to visit. Normally, there are scattered papers plus a ‘mystery pile’ on the end—it’s a mystery how it accumulated and a mystery as to what’s in it. Nothing urgent, I’m sure.

I don’t have specific things that must be on my desk, but I do have decorative glass paperweights and a couple of antique boxes on it at present, as well as pots of pens and bottles of ink…and stones to aid editing. The room would feel far too bare and clinical with nothing on the table, cupboard tops, window ledge… If I removed what is there now, it would be fine, but I’d have to find replacements. 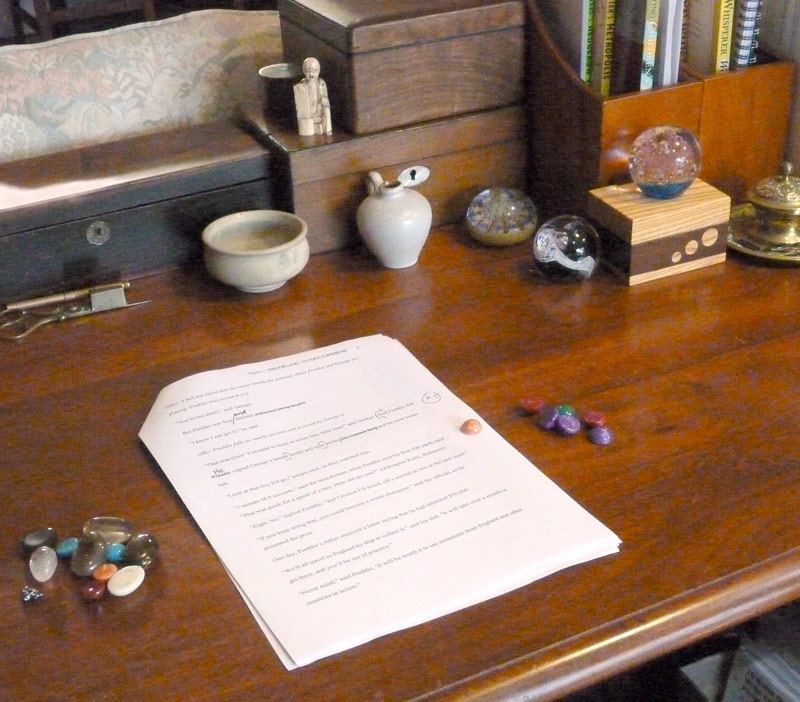 1. Decide on reward. 2. Pass a ‘stone’ from one side to the other when I make an improvement. 3. When they have all been passed across, pass each one back with each extra change. 4. Today’s reward gained when all have gone across and back …chocolate. 5. Repeat several days later. 6. When the work is getting close to ‘finished’, a reward can be gained when only a small number of stones is moved in just one direction. 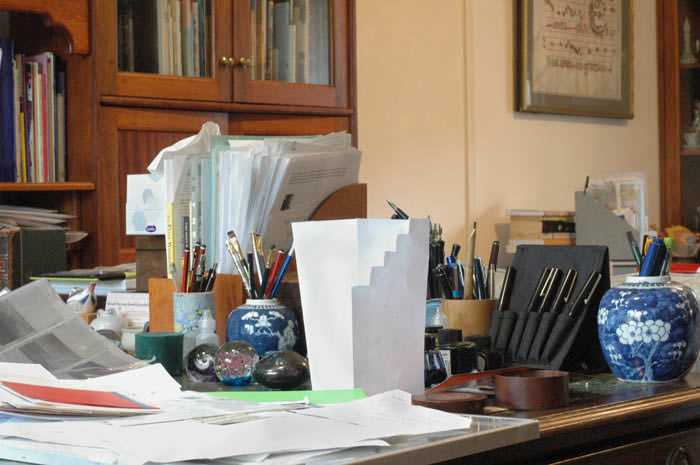 Charles Dickens was born on February 7th, 1812. Here’s an engraving of his desk, which I’ve scanned from ‘Harper’s Weekly’, published in New York on January 7th, 1871. He always had to have particular items for his eyes to linger upon while he took brief rests from putting quill to paper. Any of these objects would have been instantly missed if it had been removed. On the left hand corner, as you can see, there was a French bronze of two rather fat sword fighting toads: 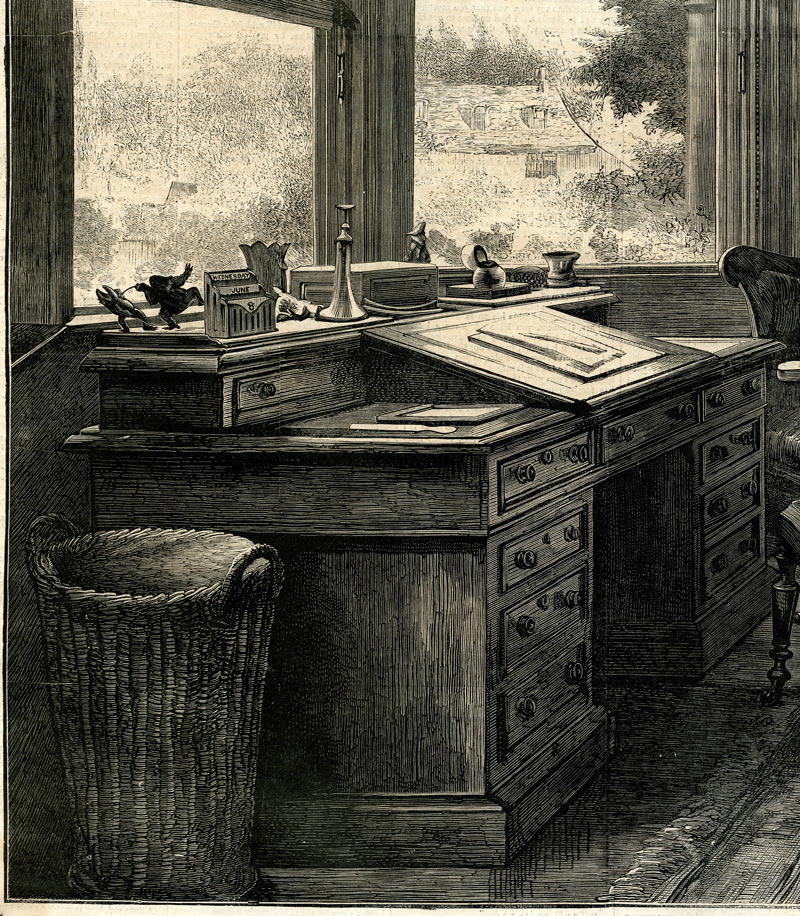 I’ve read that other items included a bronze of a dog-fancier, with little dogs under his arms and in his pockets; a long gilt leaf; a rabbit sitting on its haunches; a huge paperknife which he often held in his hand while giving readings, and a green cup, decorated with cowslips, that was always filled with fresh flowers each morning before he started to write. Wherever he worked, his calendar was always set to the correct day and date, and placed in front of him.

I wonder if there’s anything on your desk that you ‘must have in place’ before you start writing, or do you have a set routine? My grandfather was a farmer, and as soon as he stepped outside the house in the morning, he picked a fresh flower from the garden for his button-hole. I’m more casual, but I am in the habit of reading emails first thing in the morning, when I should be doing something creative. Hmm.

Dickens’ works were often first released in serial form. The Tale of Two Cities was published in ‘All The Year Round’ without illustrations, but Chapman and Hall also sold the story in monthly parts with Phiz’s illustrations. 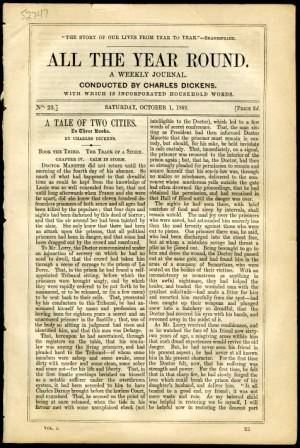 In America it was serialised in ‘Harper’s Weekly’, with illustrations printed from woodblocks engraved by John McLenan. My copy of May 21, 1859 says the story was ‘Printed from early proof sheets for which Messers. Harper and Brothers pay the author five thousand dollars. Big money in those days! 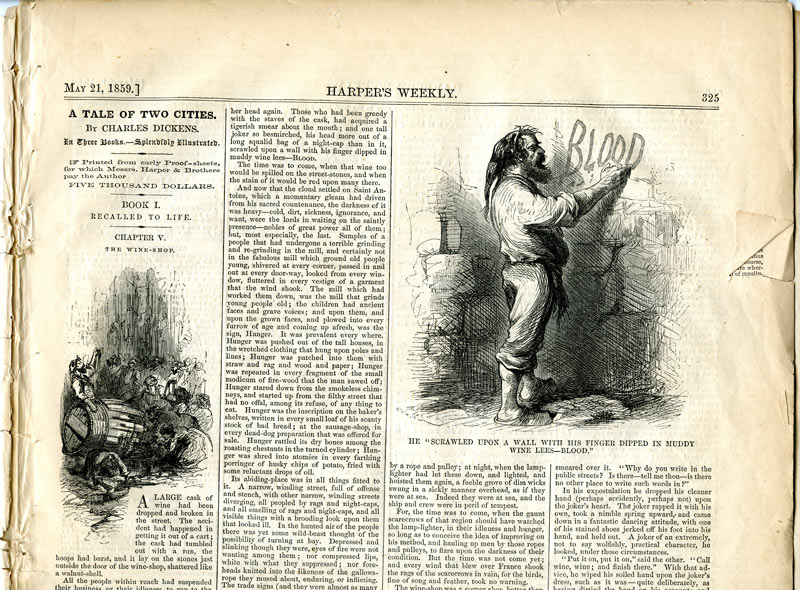 And I love the old advertisements in the magazines, too: