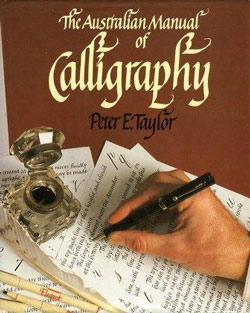 The Australian Manual of Calligraphy

It went to several reprints, including paperback

Now out of print

Two men had flown from Sydney to Brisbane on business, and prepared to meet their client. The appointment was set for 11am.

“You’ve got the contract?”

“I don’t have one either. We better get one quick – something decent or he’ll think we’re unprofessional. Which way shall we go?”

After a couple of inquiries of other wandering shoppers, the two arrived at The Pen Shoppe. Buying a suitable implement was easy, but there was something else of interest in the shop. Calligraphy. Lots of it, and it looked good.

“Are you the calligrapher?” one of them asked the proprietor, Barbara Nichol.

“This is not all mine, but yes, I do a lot,” she said. “Is there something you want written out?”

“Not exactly. You see, we’re book packagers. Publishers pay us to find authors and arrange for writing and printing of books that the publishers want created. We’re in town to sign a contract with an author for a book on yachting. But we know that Allen and Unwin want to produce a book on ‘How to do Calligraphy’. Can you write one for them?”

Barbara replied that she didn’t have time, but suggested they contact me …and the next year, in 1987, my first book was published – ‘The Australian Manual of Calligraphy’. Yippeeee! My first traditionally published book! 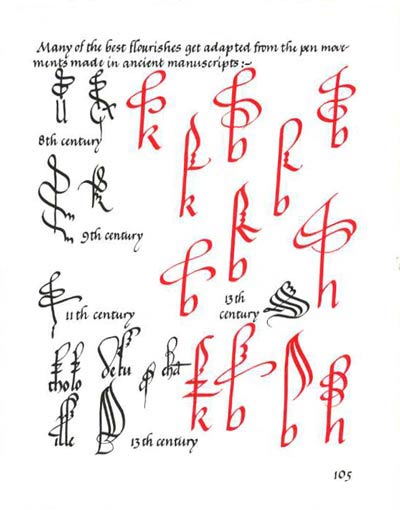 After initially reading a sample, a contract was offered, the contents agreed and a full text was eventually sent for editing. Then Allen and Unwin asked if I could write all the text in Italic calligraphy. Of course, for my first book, I said ‘Yes’ to each request. All 208 pages were written on A2 sized sheets of paper in black ink and red paint…between Easter and July. It had to be printed and available in time for the Frankfurt Book Fair in October. First, I wrote and illustrated 4 pages a day. But then ‘life’ intervened. As time became pressing and I needed to write 8 pages a day, and the illustrations became larger. This is not obvious because I wrote the beginning and end chapters first and the last ones where some in the middle. 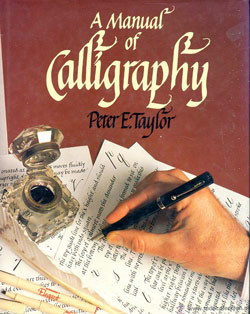 Halfway through the process, one employee from the book packagers flew from Sydney to Brisbane again, took a taxi to my studio and picked up some of the pages and flew back to Sydney with them. Allen and Unwin liked the result, and before it was printed, arranged with HarperCollins UK/Unwin Hyman that they could have a similar book printed under their name and have their identical pages cheaply printed at the same time as the Australian Edition. All theirs would need would be a different title page and cover for sales in the UK and New Zealand, where readers may be reluctant to buy an ‘Australian’ book – A Manual of Calligraphy (ISBN 0044401256).

Again, the packager flew from Sydney, collected the final pages and flew onward with them to Hong Kong to deliver them to the printer who, for some pages, employed a team of ‘surgeons’ with scalpels to dissect some of the printing plates to perfect the colour separations.

My writing and ideas have changed a little in 30 years, but there’s a lot of useful content in the book, it’s treasured by owners and used copies are often available on eBay and Amazon.